Gypsy Ray (1949 - 2020), originally from the USA, lived and worked in County Kilkenny since 2000. Her rich artistic practice included photography, drawing and teaching. In the USA she was best known for her documentary photographs, especially her series on AIDS, which concerned her for many years. This exhibition included black and white photography from the years 1983–2014, including portraits of writer Dervla Murphy and poet Adrienne Rich, portraits of friends, of children and teenagers, alongside a selection of her Holga[1] landscape works.

The face is the most communicative part of the human body, with the ability both to reveal and to cover up emotions. Ray displayed an innate engagement with the subjects of her portraits, who were usually unsmiling, direct and unflinching in their gaze. These photographs conveyed a quiet intensity from her sitters that sometimes told us more about what they do – Sculptor, Mart employee, Fisherman.

Ray captured Irish youth posed on stonewalls, in laneways or stables, or caught for a moment at play. Ray pulled the lens in close on a group of Kilkenny-based traveller children tenderly photographed with their cherished horses and dogs. In Brothers, 2010, Ray elegantly revealed the kinship of two boys’ on horseback cast against a big open summer sky. It is a poignant work that tells us a lot about the boys, even as their faces are turned away from the camera.

In the 1990s, Ray photographed a group of San Francisco Middle School students on the verge of adolescence, who shared with her their dreams and promises for the future. These photographs had not been exhibited before in Ireland. So many years later, they contain the enigma of where these adults are now; how they might have faired through high school.

The group of Holga photographs (1999-2014) immerse us in the natural world, and are reflective and more personal in spirit. The blurry corners add to the ethereal quality of these works, removing us from reality, suggesting a view both into and away from the physical world. They invite the viewer into Ray’s private space and allow us to see things as she did, capturing and recording what she encountered on her solitary walks through nature. This selection was of passageways into landscape but mostly of bridges or steps into or towards murky water. There is a timelessness to these works that seems to anticipate how the shifting weather, or the arrival of people will immediately alter the scene. The weather is keenly felt in these Holga works, where Ray successfully captured the gray shroud that invades the winter months and casts gloominess over the Irish landscape.

This exhibition also included works from Ray’s version on the Inside Out Global Photographic Project that was founded by French artist JR (www.insideoutproject.net). It is a global platform for people to share their untold stories and transform messages of personal identity into works of public art. Ray photographed studio artists at KCAT Art and Study Centre, Callan. The title for these images is “WE ARE! We are ARTISTS. No other labels please”. The project addressed the issue that artists who also have special needs are always labeled as ‘special’ rather than simply as the artists they are. The KCAT artists portrayed are dedicated practitioners whose work deserves no special status, just the same careful and critical attention afforded to any other work of art.

Gypsy Ray lived a life filled with a multiplicity of experiences that is reflected keenly in her work. Her photographs enlighten and draw us closer to how she saw the world, and for this engagement, we are richly rewarded.

A native of Illinois, USA, Gypsy Ray (1949-2020) studied drawing and photography at the University of Iowa later receiving her Masters degree in photography from Goddard College. Most of her U.S.A. based photographic work was created in California where her series based on The Male Nude and her later work with the San Francisco Aids Foundation and San Francisco Hospice received national and international attention. Resident in Ireland since 2000 she continued her documentary practice through creative engagements with local Camphill communities and with Traveller communities in County Kilkenny. Her work is to be found in many public and private collections including Permanent Collections, (U.S. Library of Congress), The Wellcome Trust Gallery (British Museum) and the David Kronn Collection (Irish Museum of Modern Art).

[1] The Holga is a medium format plastic camera – a cult camera of much repute. 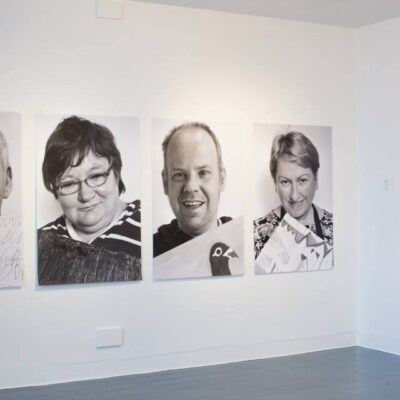