A series of exclusive talks online, delivered by the WolfWalkers Creative Team from Cartoon Saloon, providing a unique insight into animated movie making.

Visit www.butlergallery.ie for a Virtual Tour of WolfWalkers: The Exhibition.

This talk explores the influence of Irish stories, and how scripts are developed from initial ideas into fantastical visuals. With Tomm Moore and Ross Stewart, Creative Directors of the film and Will Collins, screenwriter. 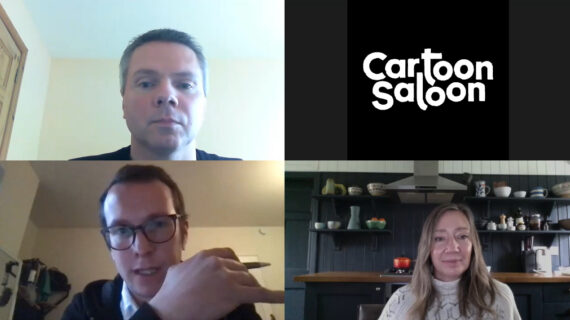 Assistant Director of WolfWalkers, Mark Mullery, in conversation with Ann Mulrooney, Cartoon Saloon Studio Manager, gives fascinating insights into the making of the film and talks about his role in the weaving of multiple creative strands into a final product for the big screen.

Producers of WolfWalkers, Paul Young and Katja Schumann in conversation with Ann Mulrooney, Cartoon Saloon Studio Manager, outlining what it takes to get a film like WolfWalkers from ideas stage to development to final green light. An industry insight into how producers support a film’s creation and completion.

Talk Series: WolfWalkers - Bringing it all together

Animation, storyboarding, backgrounds, characters – how does it all come together? Layout artist Grainne Rose Fordham and Helga Kristjana Bjarnadóttir, supervisor for Ink and Paint on WolfWalkers join Ann Mulrooney, Cartoon Saloon Studio Manager to discuss their roles in bringing various creative elements together to create the final 3D film.

A chance to discover more about the stars of the film WolfWalkers! This discussion explores the history of wolves in Ireland and the rich folklore connected to this primeval animal. Creative Directors Tomm Moore and Ross Stewart are joined in discussion with Dr Kieran Hickey, Department of Geography, UCC and author of the book Wolves in Ireland; A Natural and Cultural History.

Music, voice and background sounds are all key creative elements in the success of film. This special panel discussion brings together Kíla band members and the sound experts that worked on the soundtrack to explain and demonstrate how specially composed soundscapes contributes to the experience of WolfWalkers.