Citizen explored the phenomenon of, and our consciousness about refugees, based on the current global crisis and how a renewed collective alienation is emerging. Homelessness is ubiquitous in the world yet homeless people are perceived as invisible. Citizen builds on the central theme running through Groener’s work: that is a consideration of home and displacement as situated within current geopolitical realities. Scale, physical presence and the nature of human endeavor are present throughout Groener’s work, but never more so than the voyage we are taken on with this body of work.

The speed and quantity with which the media feeds us images daily makes it hard for us to process the impact of the violation of human dignity and its consequences as experienced on a massive scale in the world today. Groener has taken this issue on, while also posing questions about her aesthetic intention and our aesthetic response. In her research for this exhibition, Groener looked repeatedly at thousands of images of displaced people. In the installations, twigs, drawing pins and paper are chosen for their temporal quality. One installation showed a grid made up of 540 Birch twigs and paper silhouettes across three walls. Another installation was made with paper silhouettes pinned in a straight line on a wall, echoed in two vertical mirrors making the ‘queue’ look infinite. Viewed as a miniature silhouette, a refugee looks just like any person; it could be you or me. The multiplicity of scale intensifies the vulnerability of each individual subject. This ambiguity is deliberate as all boundaries are blurred when the individual is placed within a grid, while at the same time collective systems like nationality, religion, culture and family disappear. Citizen seeks to capture the actuality of the lived experience, and acts on several levels as it engages with the trauma, hurt and loss that constitutes the dialogue of this work.

Groener’s work is fundamentally grounded in drawing, where she weaves together a continuum of thinking, developing and making. The drawings made within the framework of Citizen are without colour and incorporate strong lines in black gouache on paper. Clusters of arms lay or hang together, hands reach upwards and outwards, all intertwined in an attempt to translate terror’s destabilising impact.

Featured in the exhibition were two new video works. One was Blink, a video about what it means not to see. In non-stop motion, families of refugees walk 360 degrees around the clock across time and culture. These images had been researched and taken from the Internet before being processed into silhouettes and vector drawings and then cut into paper. Interspersed throughout were images of the artist and her family – blink an eye and you’ll miss an image, blink in astonishment at the atrocities that unfold. Blink conveyed how fast and frenzied historical trauma is communicated to us through the media and how hard it is for us to process such suffering, generating a kind of moral indifference.

The second video, entitled Fugue, was shot with a handheld camera by an anonymous person running through a forest. We do not know if (s)he is hunter or predator. The video is framed in a circular form that encourages two readings – are we looking at the forest with a torch, or through the barrel of a gun? We are unsettled by the ambiguity that is deliberately suggested.

Anita Groener has created an extraordinary site-specific installation rich in atmosphere and immensely skillful in its exacting execution. The exhibition enables an imaginative journey between present and past, between here – geographical, social and cultural locations of the spectator – and there – the site of the original trauma. Groener wholly embraces one of the most important issues of our time and stirs us to reflect on the magnitude of the current refugee crisis and the subsequent homelessness that has ensued. Citizen encourages us to walk in the footsteps of a multitude of anonymous people on the move, displaced, without a country and without a home.

Anita Groener was born in the Netherlands but has lived in Ireland since 1982. Groener makes paintings, site-specific drawings, films and animation that she exhibits nationally and internationally. In 2005, she was elected a member of Aosdána. She taught until 2014 at the Dublin Institute of Technology where she also served as the Head of Fine Art from 2004-2006. In 2015 the artist was selected by Facebook San Francisco to participate in the Facebook AIR (Artist In Residence) Programme undertaking and completing a commission on site within the company’s European Headquarters in Dublin.

‘In-Focus’ with Anita Groener, offers insights into her creative practice. Groener’s work ‘Matrix (Citizen), 2015 is exhibited in the Butler Gallery Collection and was kindly donated following her exhibition ‘Citizen’ at Butler Gallery in 2016. 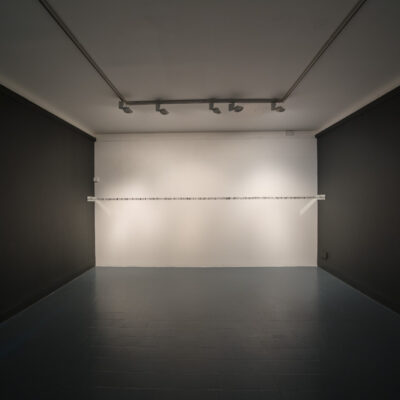