A series of exclusive online talks, delivered by the My Father's Dragon Creative Team from Cartoon Saloon, providing a unique insight into animated movie making. 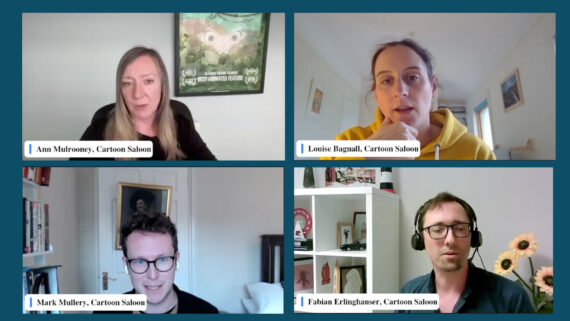 Assistant Directors Fabian Erlinghauser, Louise Bagnall (Oscar nominated for her short film Late Afternoon) & Mark Mullery discuss the role of Assistant Director in carrying through the Director’s vision, and the challenges of working with such a large crew during lockdown.

Director Nora Twomey, Head of Story Giovanna Ferrari and Editor Richie Cody discuss how they work together to hold a vision of the finished film throughout the film-making journey, making sure all the individual elements - colour, character, FX animation, sound design and score - coalesce.

Art Director Áine McGuinness led a team of concept artists, location designers, painters and character designers to create the immersive feel of the film, from the dustbowl to Nevergreen city to Wild Island. Áine, along with Assistant Art Director Emilie Bach and Lead Production Designer Rosa Ballester Cabo talk about the visual inspirations for the film and the roles of colour, pattern and light in the storytelling.

Cartoon Saloon’s Oscar nominated director Nora Twomey and Head of Story/Animation Director Giovanna Ferrari demonstrate how they adapt the written word into visual language. Drawing from their previous work together including The Breadwinner and My Father’s Dragon, they break down their development of a storyboard from script stage, giving a glimpse into the creative processes they use.