Trish McAdam makes narrative films in response to socio-political issues, personal encounters and artistic collaborations. She represents the outsider and embraces issues such as homelessness and political activism. This exhibition included continuous screenings of six animated films in three of the four galleries, with one gallery dedicated to drawings that were made in the development of the various films. Mostly realised in rich charcoal, these idiosyncratic drawings reveal McAdam’s range as a skilled multi-media artist. They also illustrate aspects of the far-reaching research the artist undertook to shape her material.

The suite of animated films included Strangers of Kindness (2015), about a night in the 1980s when travelling in America and accepting an invitation from a stranger outside a bar to a party that turned out not to exist; Falling Man and RoughTime (2013), with a script based on interviews with homeless men, interpreted by Paris-based Butoh dancer Gyohei Zaitsu and composer Trevor Knight; a trio of charcoal animated films on Chinese Activists, A Poem to Liu Xia (2015), a collaboration with Zeng Jinyan for Chinese artist Liu Xia who has been under house arrest without charge in Beijing since 2010, and two commissioned works by Front Line Defenders, No Enemies (2012) with multiple narrators, including Seamus Heaney and Salman Rushdie, about imprisoned Chinese human rights defender Liu Xiaobo, the 2010 Nobel Peace Prize winner, and Caged Bird (2012) to raise awareness about the plight of the blind lawyer and Chinese activist Chen Guangcheng and launched on YouTube in December 2011.

In this exhibition, Strangers, McAdam relied on instinct and revels in the act of drawing. She finds power in the creation of a vocabulary of moving images from such simple sources as charcoal, paper and a domestic digital scanner. “Working with charcoal for the animation, the pleasure was physical, the feel, the sound, the smell of the charcoal in my hand as it scraped across the paper, a direct connection between hand and brain. Coming from a film background in which as a director one works mostly through other people, like a conductor of an orchestra, drawing and animating felt like playing my own instrument again.” McAdam sees the gallery as a cinema without seats, as an immersive space where image and audience can merge minds.

Trish McAdam has created extraordinary films that address important issues of our times. The art of animation has unlocked a surprisingly flexible tool that has allowed this artist to tell poignant stories of true significance that encourage an audience to react, to sympathise and ultimately to be moved.

Trish McAdam was born in Dublin, where she lives and works. She studied in UCD, College of Marketing and Design, DCU and in 2011 received an MA in Visual Arts Practices from the IADT/Institute of Art, Design & Technology, Dublin. She has given talks and lectured on Film Studies in Dublin City University, Trinity College, Maynooth College, Oxford College and Oklahoma University. McAdam worked in photography, graphics and short films before making her first feature Snakes and Ladders in 1996.

She has produced and directed documentaries for RTE and was the founding chair of the Screen Directors Guild of Ireland where she served from 2001-2007. 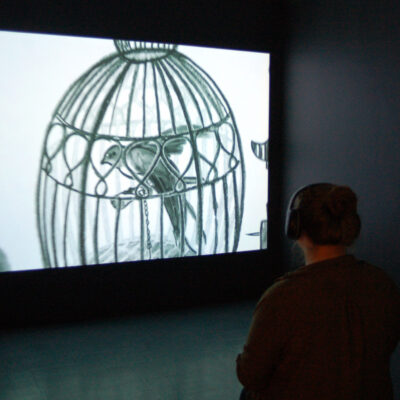